This page contains links to data I have collected for my thesis on Analyzing Domestic Abuse using Natural Language Processing on Social Media Data. You are welcome to use any of this data for your research, but please cite the relevant paper and follow the terms of use if you do so.

Please read the papers first before contacting me with questions.

Twitter users unequivocally reacted to the Ray Rice assault scandal by unleashing personal stories of domestic abuse via the hashtags #WhyIStayed or #WhyILeft. In Schrading et al. (2015a) we explored at a macro-level firsthand accounts of domestic abuse from a corpus of tweeted instances designated with these tags to seek insights into the reasons victims give for staying in vs. leaving abusive relationships.

Twitter restricts public sharing of tweets to only tweet ids. Accordingly, the format of the data is as follows:

Getting the tweet text and additional information using Twitter’s API

In order to gather the tweet text and additional information about the tweet, like user information and retweet count, you must use Twitter’s API. I would recommend using the GET statuses/lookup API call because it allows you to look up 100 tweet ids at a time in bulk. Provided below is Python code to do this, using Twython as a wrapper for Twitter’s API.

To use this code, you must have Twython installed. Installation instructions, and how to set up a Twitter API account are on Twython’s githup page.

If you use this code, the text provided (Tweet.text) will still have hashtags, and is uncleaned and unprocessed.

Not every instance actually contains a reason for staying or leaving. Some may be sympathizing with those sharing, or reflecting on the trend itself. Others may be ads or jokes. The following chart shows the distribution of such classes in a random sample of 1000 instances. More information is in the paper. 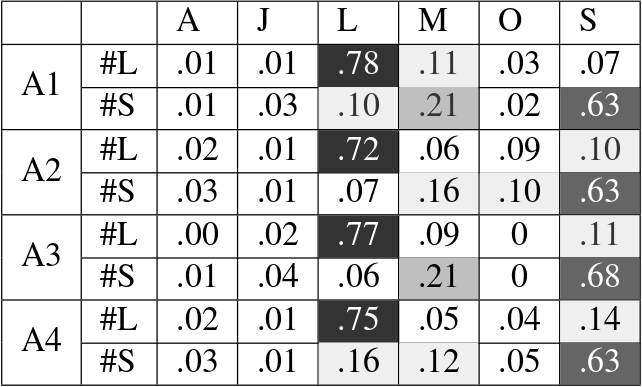 Some of this dataset was used in Schrading et al. (2015b) to study the dynamics of domestic abuse. Submissions and comments from the following subreddits were collected, and assigned a binary reference label (abuse or non-abuse) based on the subreddit title:

Download the “shelved” abuse classifier trained on the uneven set of data here.

There are two formats for the Reddit data. The most flexible is the entire database used to store all the data I collected. You will have to use sqlite to access the database (Python has an API for interacting with sqlite databases). For those who do not wish to interact with the database but want to access the provided datasets used in my experiments, I have provided Python shelved data files for use in Python.

The sqlite database named “new_reddit.db” has 3 tables within: submissions, comments, and submission_srls. Their columns are as follows:

The shelved files provided are as follows (note that lists are aligned e.g. submissionId lists align with the submissions in data lists. Also note that a submission is the initial post, and comments are linked to it by the associated submission ID):

The shelved classifier is a scikit-learn Pipeline consisting of TfidfVectorizer with a custom tokenizer, followed by a LinearSVC. Its key in the shelf is “classifier”. To predict whether text is abuse or non-abuse, call the predict() function given a list of text. For example:

Note that to use these shelved objects, you may need to use Python 3, not 2.

This work is licensed under a Creative Commons Attribution-NonCommercial-ShareAlike 4.0 International License.